Waitakere College is open for learning for all students.

We continue to encourage anyone with symptoms to stay at home and get tested, (click HERE for details of symptoms) and we thank families for doing this to stop the spread of this virus and protect our community.

Waitakere College staff and students continue to follow strict guidelines to reduce the spread of any infections. (Click HERE for protocols)

A collection of homegrown diverse individuals with close Waitakere College and West Auckland ties, coming together with a sense of whānau and kinship to help navigate the Waitakere College Foundation towards the purpose for which it was formed. 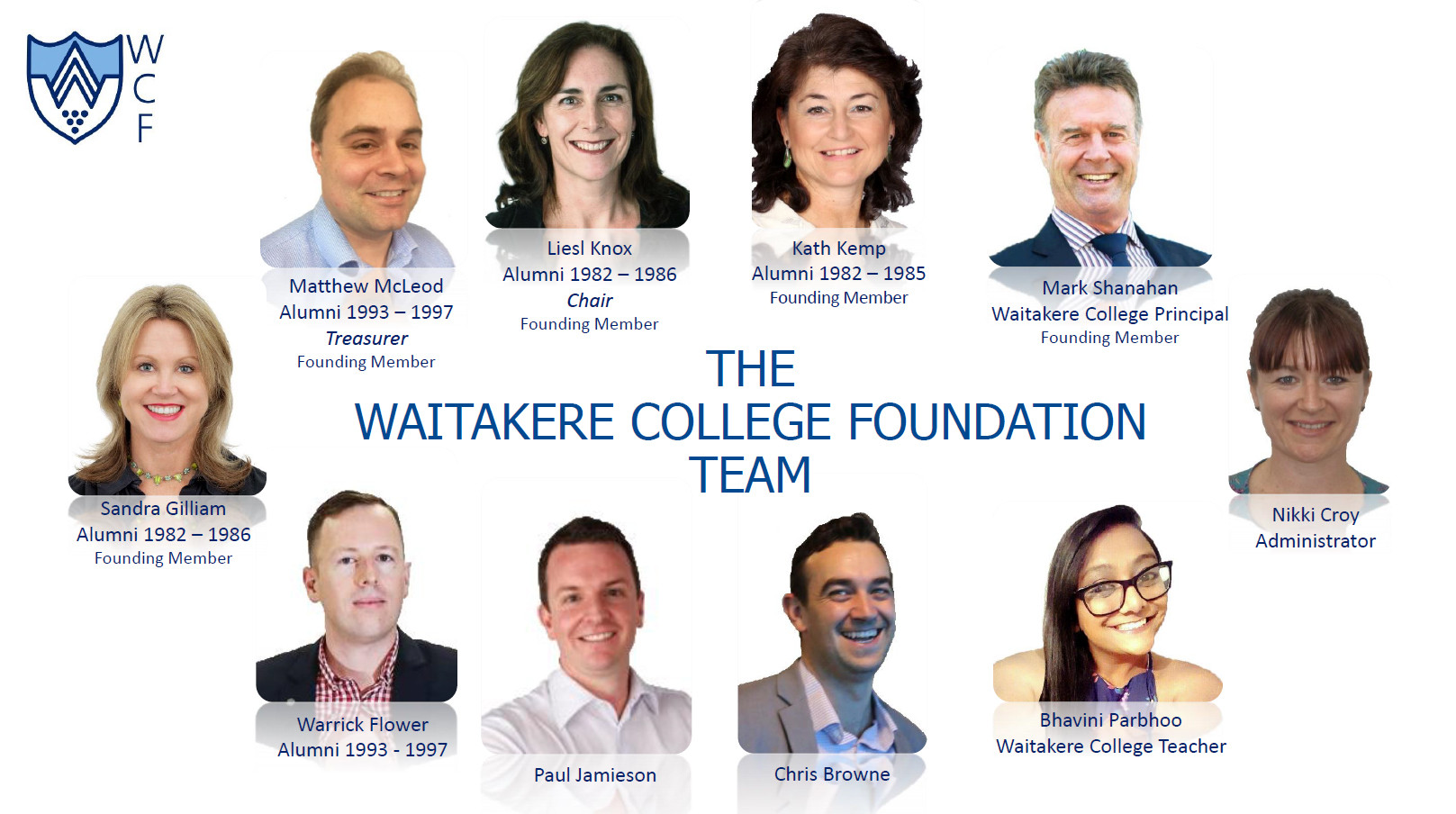 A bit about our Trustees:

Liesl Patterson - Chair
Alumni 1982 – 1986
After leaving Waitakere College, Liesl attended Otago University where she graduated with a LLB.
Liesl has worked both in New Zealand and overseas gaining over 20 years legal experience in both large international law firms and in-house environments, including working with and for Coca-Cola & Cadbury Schweppes, National Westminster Bank, Barclays Bank and Lloyds Bank, and General Councel at Fisher & Paykel Finance Ltd.


Matt McLeod - Treasurer
Alumni 1993 - 1997
After leaving Waitakere College, Matthew attended The University of Auckland and received a BCom.
While at Waitakere College, Matthew started his own IT services company Vivid Computers which he has continued to develop after graduating from University. The company specialises in providing IT services to small and medium businesses and not-for-profit organisations.
He is actively involved in the Rotary Club of Henderson, serving as it's President in the 2015-2016 year and his involvement in the Waitakere College Foundation was sparked by a desire to give back to the school which was instrumental in supporting his early business ambitions.


Mark Shanahan
Principal 2007 - Current
Mark is recognized for his leadership contribution to a variety of regional educational, business and school sports bodies.
"We seek to enhance the educational outcomes for students of the college by raising funds to support learning through scholarships, funding special projects, and providing better opportunities to succeed educationally, not only to fulfill each students potential but to grow each student into becoming a positive contributing member of our community".

*Currently employed as Director International Students, Waitakere College.
* Previously worked in Marketing, Media and Tourism sectors with experience as a school Board Trustee.
* Waitakere College Foundation Trustee since 2015
"Being a long-time ‘Westie’ myself it is heart-warming for me to see West Auckland kids ‘become their best’ as proud, successful citizens,
and to assist at this important time in their lives. The Foundation is a great way to collect and manage funds to enable young people to develop via their education. I find it very satisfying, as well as a privilege and responsibility, to be able to contribute in some way."


Sandra Gilliam
Alumni 1982 - 1986
Sandra left Waitakere College in 1986 and since then has developed a career in human resources. She has worked in major law firms in New Zealand and Australia, as well as for companies as diverse as Cisco Systems and Allpress Espresso.
Across the diversity of these companies Sandra has always been committed to the continuous development of the people she works with and the role that on-going learning plays in that.


Chris Browne
A born and breed Westie Chris spent most of his youth running around the school grounds patiently waiting for his Dad, Mr Browne a long time teacher at Waitakere to finish school meetings etc.
Chris graduated from Auckland University and now runs his own Financial Advice company with his brother, Tanta Financial Advisers. A true believer in hard work will get you anywhere, Chris makes a big effort to give back and help the community that he grew up in and support those in need of a little helping hand.


Paul Jamieson
Paul studied at Massey University, graduating with a Bachelor of Applied Economics (Hons) in 1998. After 4 years at working at the Reserve Bank of New Zealand in Wellington, Paul travelled to the UK and worked at UBS, Deutsche Bank and Moodys, before returning to New Zealand in 2010.
Paul has 20 years’ professional experience in structured finance, treasury, and banking across New Zealand and overseas.

With experience as an Executive Assistant and Marketing Assistant, Nikki will be working with the Trustees, Supporters who provide funding and Students who receive funding from the Foundation.
“As a born and bred ‘Westie’, I am truly passionate about the area and I enjoy seeing people achieve their goals. I will be working hard to make sure that the Foundation can provide assistance to the students that have a dream, but need a small hand up, so that nothing stands in their way.”