One of our past students - Kelma Tuilagi, was a humble quiet achiever in his time here at Waitākere College. Kelma started off playing Volleyball, which he was very good at, with his height taking on blocking, spiking with speed, and combination play all-rounder.  He also played in Club Volleyball.  His last year with Waitākere was in 2013.  Kelma went from Volleyball to Rugby League, which he pursued as his career overseas in Australia, and is currently still living there.  He played NRL - with Manly Warringah Sea Eagles & West Tigers.

In 2022 - he represented Toa Sāmoa in the RLWC and all the way through to the finals vs Australia just in the past weekend.  An amazing story for the Pacific Nation, Sāmoa being the first pacific team to qualify for the World Cup Final in both Rugby League and Rugby Union. Leading up to the final - you see Sāmoa Parades all over the world, flags flying high, districts coming in full swing, fireworks in the mix, cars decked out with blue and red flags, and also having the Police amongst the parades in support.

A moment in the game, final vs Australia, quick play from Kelma, passing the ball last minute to Brian To'o scoring a try.  Sāmoa lost in the final, but definitely won hearts around the world.  A RUGBY LEAGUE WORLD CUP to remember.  Malo lava le ta'alo fa'atamali'i Toa Sāmoa.  Well done Kelma, alofa atu from your Waitākere College Aiga.  #685 to the world. 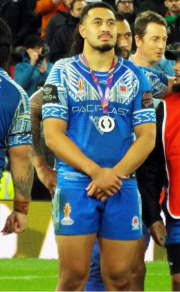 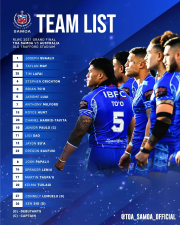